Pasta so! And what?

Since everyone is talking about it, I had to go. It si another restaurant of William Ledeuil, known for his Ze Kitchen Gallerie.

If the decoration is generally rather banal, I would still like to know who made the choice of table tops. This is similar to the Stalinist buildings of the disastrous suburbs of the 50s and 60s. This kind of aggregated concrete embellished with a color in the mass to try to brighten up the long corridors of dismal low cost housing buildings. Here, on a background of a pink sandstone, some acidulous plots try to save the furniture.

Not shrinking from any sacrifice, I opt for the full menu at 30 euros. 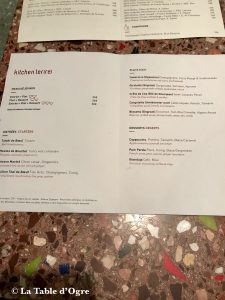 Thai beef broth is a very nice combination of Asian tastes combined with foie gras. The fresh raw herbs, salty broth and fat of beef and duck, everything is well balanced.

The interest of the Cargolette lies mainly in quail. They seem to me confit in low temperature and just pan-fried before serving. Very soft.

As for pasta, I’ll do my red neck: well it’s pasta, so! Even if I can understand the research work to revive forgotten cereals, I will not go through Paris to fall in pomoison before Khorasan wheat or black starch.

And leaving my perfectionist, it would be nice to train the handler not to play rugby with the packages. Because ending up with a broken plate is a bit of a shame for upstream work.

For the French toast for dessert: the pear is quite absent, the quince fade, the ginger saves the bowl. 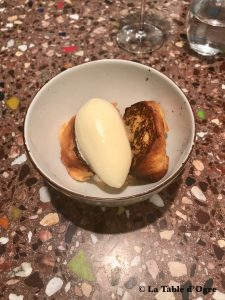 What about the service? Young people, it’s cool. But here it is a little unkempt. Shirts off the pants, dressed as everyday. Despite all the professionalism acquired, in these conditions, we relax.

So we start pecking in the kitchen during the service.

No, Miss, we do not use the aluminum of the water fountain as a mirror to extricate a piece of food between the teeth!

Yes, young man, that’s twice that I ask you a little butter.

The fact remains that for 30 euros, the price-quality ratio is quite adequate. The wine is a bit expensive but you have to ensure the margin. 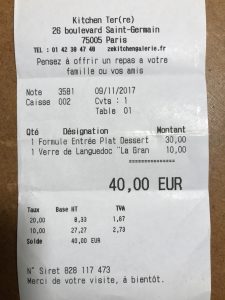