Sainte-Anne, patron saint of the climbers.

On the top of the main square of Porquerolles, Villa Sainte-Anne is itself dominated by the church of the village.

This atavism of the heights is found with constancy in the composition of the plates.

The terrace deserves a little sprucing up but offers the advantage of having dinner in peace, this part of the place being much less noisy than the bottom. The house has the same owners as the renowned Mas des Langoustiers. There is therefore a similarity in the work of the kitchens.

If the steak of prawns surprises with its interesting mascarpone wasabi, it is a bit spoiled by a toast in base too dry and too wet. Contradictory? No because the toast is thick enough to stay very hard on its lower part, but it absorbs all the moisture from the salad that rests on it. At the top of the mound the steak of prawns. The cutting of this pile is perilous and chewing unpleasant to the palate. 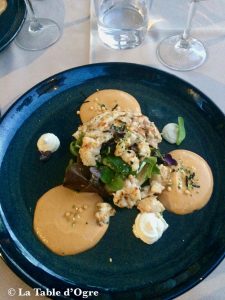 The octopus salad is classic and pyramidal. 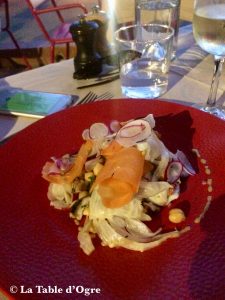 The filet of cod is the archetype of pompous and poorly controlled appellations. I transcribe: “Roasted cod loin, potato pancake with candied onions, fish fumet with smoked herring pearls”. First a pancake, it’s round, not rectangle. Then, herring pearls, it’s eggs. For sturgeon, it’s classy. With herring … Rest the presentation. The pancake-brick in one direction, the cod on top in the other direction, a good sauce louche on the whole and two pretty new leeks fried to top it off! I attack the plate. Sir Edmund Hillary had better behace himself! 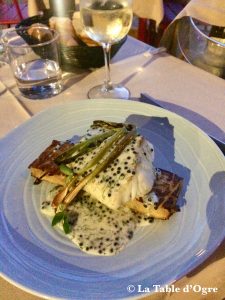 Dessert, a Yuzu Dome, also has a little air of the “Badaboum” of our childhood. 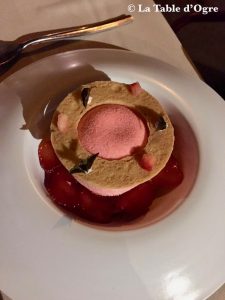 To be fair, it must be said that all this concerns only the form. The dishes are good, with quality food, well worked and well cooked.

Everything accompanied by an excellent Côtes-de-Provence Domaine Gavoty 2013. 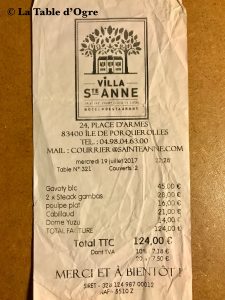