Here is a restaurant that would be a fair average culinary level if … I’ll keep the best for the end.

It has a website that makes the effort to be translated into French and English. You will find me a little hard but you have to know that as the Dutch have a terrible language that no one wants to learn (except maybe aliens who find there by the greatest chance syntactic correlations), they learn all English, German and French during their studies. So to make as many mistakes on a site while it is enough to ask some friends more competent in the language of Molière to make the necessary corrections, it is laughable. 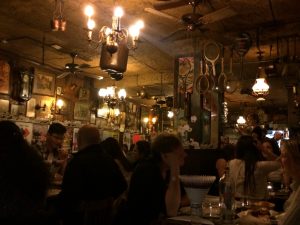 Then this restaurant claims to be one of the few still offering traditional Dutch cuisine. This is why we find typical dishes such as nicoise salad, bourguignone mussels, Belle-Hélène pear or Melba peach! I’m teasing.

Obviously, I was rather interested in real local dishes. 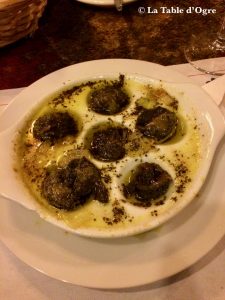 As you can see in the photos, it is mainly an assembly with a rather rustic presentation. The Texas-size plate of accompanying vegetables for beef stew suffocates you in advance. Not very exciting both visually and taste. 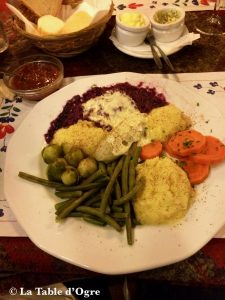 Do you know what nasty languages ​​say about the meaning of NL at the back of cars? That would not mean NederLand but “Nur Limonade”. My mother lived in the Netherlands for eight years, I know a little bit. They are very nice people, but besides the “pot”, they rarely go out of bounds.

Except about hygiene! And that’s when I conclude my article on tablecloths! Sorry?

Indeed, the tablecloths are actually thick carpets (it’s original, okay) that probably did not come out, beaten, dusted, washed every day and between each service. I do not even imagine the larder that remains there bit to bit of meals. I did scouting, I’m not scared of microbes, I’m not a hysteric HACCP standards, but this is really the sheaf. Obviously, there are intermediate placemats. Nevertheless, it is inconceivable in the 21st century in Europe to serve dishes in these conditions. 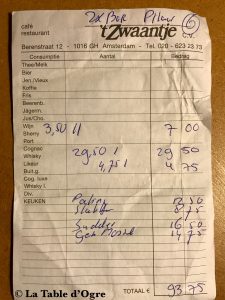