Despite all the sympathy we have for Dave (most famous dutch singer in France), we must recognize that Dutch cuisine is not the richest in the world.

They tried to sell us some cheeses, but they kept the best. It is indeed quite difficult to find in France the old Edam or a correct Leerdamer.

So we have the maatjes! Because why going in Netherlands without eating maatjes?

New herring emptied but whose pancreas has been preserved. With or without onions? More or less salty? With or without bread? The maatje’s war will not take place. It melts in the mouth and we ask for more. 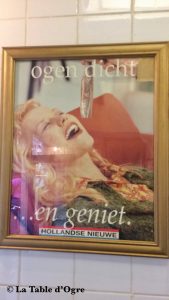 Rob is one of those institutions in Amsterdam that we feast on this specialty. It is located in a very narrow street close to Dam, the central square of Amsterdam. Do not expect luxury, small shop with four tables, this is mostly Take Away. But Rob is extremely friendly, makes efforts to speak foreign languages to his visitors. It is true that the Dutch learn 3 foreign languages ​​at school!

Leaving Rob’s house, if you turn right then left, you have on Nieuwendijk, 220 a Dutch fast food, Febo, with vending machines style year 70. They have “Kroket” beef of very good quality. It’s not light but it’s nice.


Date of the visite: 2017 May
Traditional