A MOF at the helm.

A wise man change sometimes his mind, a fool never. And it is true that I hate to give a superlative, too common habit that unfortunately applies to both pizzerias and starred restaurants.

But in a relatively small panel like Mauritius, where only the pretension of some seems to compete with the competence of others, we need to acknowledge, after having tested some, that Michel de Matteis made La Goélette the best table in the country. 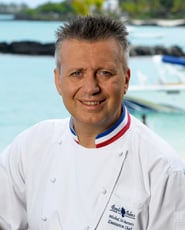 His status as MOF (Meilleur Ouvrier de France, Best Worker of France, the most important official award in France) is undoubtedly not irrevelant to this fact.

Obviously, he works local products, of course he mixes the spices of all countries bordering the Indian Ocean. But it’s the small edge of originality that makes the difference.

I was able to get a table in the evening for my friend’s birthday. Always this difficulty in Mauritius to dine in luxury hotels when you are not hotel client. When the chef told me “Oh yes, I’ll take care of you!”, I was a little afraid to know what sauce we were going to be eaten! We did not get the whole menu, but almost. Some dishes are not on my bill because the chef did a tasting of many of his dishes in addition to our order.

As for example its marbled duck foie gras with smoked alabcore tuna. A perfect combination (classic but not always successful) between Land and Sea.

The sweet sea urchin with combava is absolutely essential. For those who appreciate the unique iodine flavor of this echinoderm.

The roasted duck supreme had a perfect cooking, medium rare like the strange crispness that covered it. Maybe the only visual mistake of the whole meal. I do not find it the best effect.

And to get into technical considerations and to nit-pick, I found in crustacean sauce a slight taste of “ferré”. It is a cookingexpression for a little iron taste. This is due to too long cognac buckling after cardinalising the carcasses to make the fumet. Probably an apprentice who has been carried away by the flame of his enthusiasm! But I recognize that we are in the limelight and that most normal customers would not have realized.

Do not be surprised by the simple cup of strawberries. But my friend is diabetic and therefore deprived of desserts. The chef still made this preparation “light” to mark the occasion.

A progress to make? Apart from the strange fact that the service is exclusively male, there is a big weakness in the knowledge of the wines. It is true that we Westerners are immersed in this culture and that it may seem complicate to train local personnel, who are also very competent, in the diversity and subtlety of oenology. But at the gastronomic level of the restaurant, it is a fault to fill imperatively.

Do not hesitate to come a little earlier and have a cocktail on the terrace with a view of the sea. Be careful, the sun sets early! 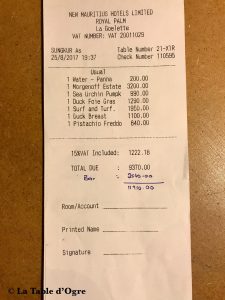