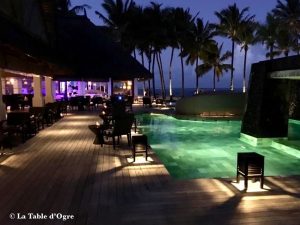 We had the opportunity to visit the three stocks that will make any amateur dream. But for the restaurant, it needs work…

The setting is not particularly elegant, as the designers favored a relaxed atmosphere rather than luxury. The inconvenience is a loud sound due to hard walls. The front part is quite low ceiling. 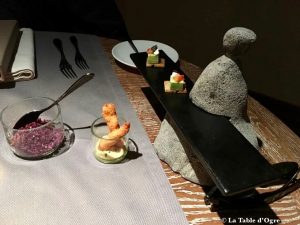 Hardly had we ordered that we were served! Efficiency, speed. And yet, we were taught that the kitchens were centralized for the whole hotel, so far enough away from this room. The waiters will demand rollers in not long!

Except that we did not have the chance to present the wine list! You know, the drink in 18,000 copies presented above and which is the pride of the place. It is not with this kind of method that they will sell the stock! If I had been naughty, I would have sent the entrances to the kitchen while waiting for the selection. But I was not there to be wild, I let the director make a quick choice.

Both starters and dishes are well done but we are closer to the bistronomy than gastronomy.

Tomatoes with burrata are a basic assembly. The size of the plates are good, well cooked. Everything is “kind”. 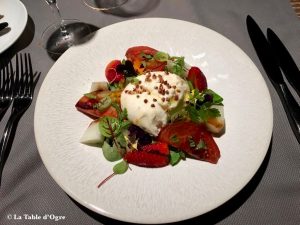 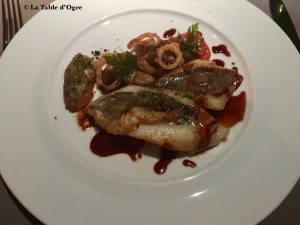 As for the desserts, concept requires, they are all prepared in advance and to choose from a buffet near the entrance. It’s like being at self-service buffet! 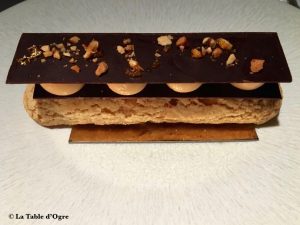 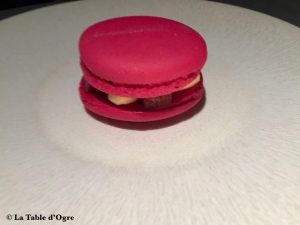 It is true that if it belongs to the same group, the Constance Belle Mare is of a lower standing than Constance Prince Maurice, located next door.

But what is questioning me is the gap between solids and liquids. I do not understand how it is possible to find enough customers who will pay 500, 1000 or 3000 USD for a bottle accompanying only banal dishes and desserts of pastry shop. As much to have fun as an aperitif with an expensive Salon, it’s one thing; but a Pétrus or a Romanée-Conti on a tomato salad or a white of poultry (not even Bresse), I’ll beleive that when I see it.

You will tell me that we still find some Russian russian or incompetent Chinese (or vice versa). But we do not make a sustainable commercial approach on this kind of postulate. To conclude, my Felton Calvert Road 2014 was not worth its nearly 135 USD, too young, too sprightly; the meal was ok, the service friendly, with a Mauritian sommelier but born in Alsace! 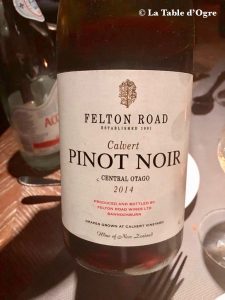 A director who cares for his clientele. But it will take effort to change a big gear to claim to play in the Big League.